Is it possible that apparently innocuous Catholic sacramentals, such as rosaries (see HiCatholicMom) and so-called "miraculous medals", can actually be New Age artefacts? Sometimes I am asked about such claims.

Three things could potentially corrupt what is apparently a Catholic Sacramental.

The rosaries in question do indeed show a serpent coiled around a pole and have pentagons at the end of the four arms of the cross. I wonder what the designer intended?

In the Book of Numbers, 21:6, God commands Moses to make a bronze serpent on a pole, through which God miraculously heals those Israelites bitten by poisonous snakes. In the Gospel According to John, 3:14, Jesus uses that serpent as a prototype of his own being lifted up on the Cross so that the whole of humanity can be healed from sin. The Numbers reading is the First Reading on the liturgical feast of the Triumph of the Cross, September 14th. We may be rather uncomfortable with a serpent - a Biblical symbol of temptation - being a prototype of Christ Our Saviour; but it is clearly used by Jesus Himself, so it is a legitimate image.

A pentagon has five sides. There are five mysteries in each decade of the Rosary. Christ is traditionally reckoned to have suffered five wounds on the Cross. The circles inside the pentagons form a design which looks rather like roses - appropriate for a rosary. Any or all of these things may have been on the designer's mind when the mould for this crucifix was crafted.

The bottom line: Does this crucifix bear any symbols which are unambigously pagan or New Age? No.

Does this crucifix have symbols which are totally explainable by Christian traditions? Yes.

My best guess, therefore, is that someone has looked carefully at these crucifixes, seen serpents and pentagons, leaped to the conclusion that these must have a New Age explanation, and now their unwarrented concern is doing the rounds of the Internet. If this is the only reason that there is concern about these rosaries, then there is no reason at all to worry.

If any reader has any evidence OTHER than the design that there is some New Age intent behind these rosaries, please contact me in complete confidence and I will revise this advice accordingly. 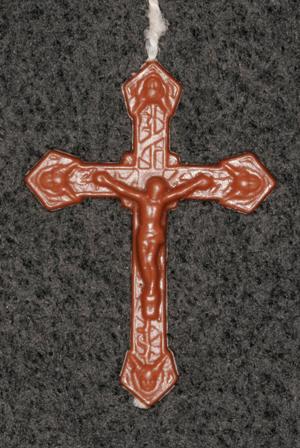 Since posting the article above, correspondents from two parts of the eastern USA have been in touch to say that they have found rosaries with a different kind of design, where the tips of the cross seem to have "demon's faces" or "bats' heads" on them - an example is given at the right. Again, it is not possible to make a definitive answer without contacting the designer and asking what was intended. But in this case, the design is not edifying, for even if the designer intended to depict some sort of winged angel, the end result looks more like a horned creature than an angelic being.

With such a design, it is at least plausible that anti-Catholic groups might have produced and distributed such rosaries with malicious intention. Even so, any Catholic innocently using these rosaries for prayer will have been engaged in activities pleasing to God. A person realising that the design of their rosary is not edifying might be wise to destroy the item, but should not be unduly concerned.

In some cases, a person who feels emotionally or spiritually disturbed because of handling such an object might need to approach a priest or healing prayer team for counsel and cleansing prayer. But in general, the prayer life of a person committed to praying the rosary will be a more-than-adequate antidote for the spiritual intentions of those who might want to put rosaries with evil images into the hands of Catholics.

Do not be afraid! And remember - each time you pray your way around a set of rosary beads once, you will have asked God to deliver you from evil six times, and invoked the protection of the Mother of God 53 times.

Copyright Notice: All texts hosted on this website are © 2005-2015 Gareth Leyshon except where attribution is given explicitly to other sources.